So summer is here and some people are tanning, while others are frying. The smart ones (or insanely over worked) are staying indoors and maintaining their fancy natural skin tone.
Unfortunately for the avid Equestrian fan, the summer tan/burn causes some exciting markings, that last a little longer than we would like! An equestrian's summer tan markings can easily be compared to the ones naturally occurring in the Equine Species. Sadly for us, these markings aren't as attractive on humans!!!
A couple of unique rider tan lines compared to our horsie friends are:
Pasty Legs- this equals 2 hind socks (please excuse the muddy feet- this is my horse and it was a muddy winter day!!!) 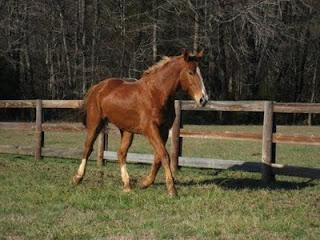 (this is seriously the cutest looking tiny pony!!)
Sunglasses tan= poultice face
Liaison did something to his leg (I can't remember what) and he reached down to scratch his face and in the process covered his eye in poultice! I couldn't find a picture of a horse with sunglasses type of markings (was going to look at more paints) but decided that this would be funny enough :) 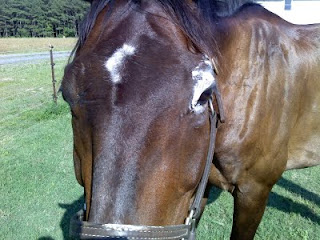 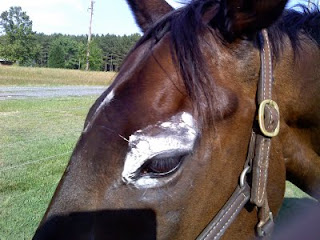 Everyone's "favorite tan"- the Farmer's tan-cute little paint baby standing with someone who could very well be on his way to getting a REAL farmer's tan!!! 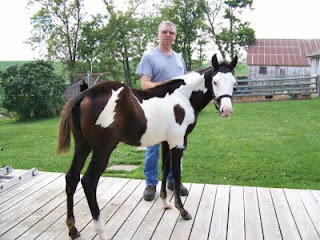 And then the Last Tan (that I can currently think of- though I'm sure there are more) is the:
"I have holes in my clothes and forgot to put sunscreen on those spots" tan 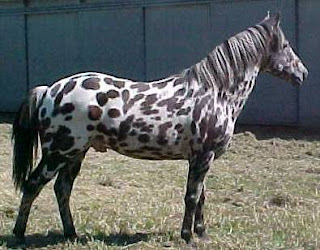 So remember this summer- wear your sunscreen, wear your hat, and hope that you don't start looking like your horse!!!
Posted by Bee Tea at 9:16:00 PM No comments:

Obviously this past year has been really exciting. Apparently I was so caught up in all the "eventful" happenings that I never posted another blog until now.
Truthfully the year was extremely eventful! It definitely had it's ups and downs and huge shake ups. Liaison- the TB that I had last year taught me a lot about myself and took my riding to a new level- not so much in the direction that I wanted it to go, but gave me a new experience with brain fried TB's. The quick recap of the summer with Liaison goes like this:
He healed beautifully from his run in with Byrd and we were headed off to
our first show together- Dressage Rally. I knew going into Dressage
Rally that we weren't going to have the most amazing score because Li was a tense thoroughbred. He was calm as a kitten at home and had the best ground manners- a puppy could lead him- and well, did! 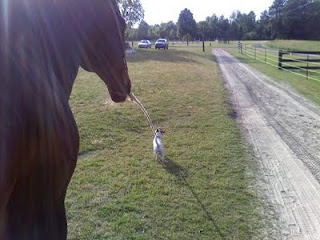 But even though on the ground he was amazing, when riding he was like riding a lit fuse. Most of the time I was able to channel that energy in a positive direction, but other times it just caused him to tense up and be extremely flighty. So with the arrival of Dressage Rally we headed off to see how he would be off the property. I knew it was going to be exciting, but I was not prepared for the end result- elimination because of inability to get him into the Dressage ring. It was the biggest disaster of my riding career (and thankfully an injury free one!) and I was embarrassed by his behavior. When we were in the barns he was great, but as soon as we crossed over into the show area with the announcer and other competitors warming up/riding their tests, Liaison lost it. I barely even made it into the saddle before he started running backwards and leaping into the air and spinning uncontrollably. I heard shouts aimed at me to "control my horse" and others directed at the small D pony clubbers to "MOVE! GET OUT OF THE WAY" who were mindlessly walking their ponies into the destructive path of the crazed TB. I tried to control him and settle poor Liaison down but there was no hope- I was forced to jump off and take him back to the barn. I tried longing him- which was successful while we were in the barns- his quiet unflappable self returned and the TD let me try to ride my test again because she was impressed with how quiet he had gotten. But again- as soon as we crossed the imaginary line he went bonkers. I ended up keeping him under a tree out of the way until it was time for my test- but even with a lead into the ring, I couldn't make it to the letter "B" before he stood up on his hind legs and I was forced to call it quits and take him back to the barn. I was ready to send him away after that weekend, but with no other horse as a B candidate I couldn't send him away quite yet.
So I spent the rest of my summer looking for another horse, and only finding one that was able to do the flat work part of the test, but by that point I had Liaison settled down (sort of) and had kept him away from places with announcers (which seemed to be a trigger- flashback to the racetrack?) and we even completed a successful upper level ratings camp where he was so quiet and relaxed I swore someone swapped horses when I wasn't looking! 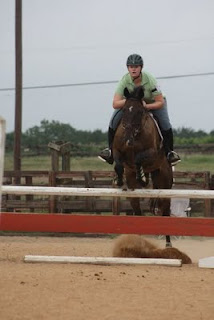 My ultimate goal that summer was to pass my B rating on Labor Day weekend, and even with another horse for the flatwork, I wasn't able to make it happen. Heck no one in my rating was able to make that happen! We all failed the very first section of the rating- the Flat. I remember being so pissed off because I thought that I had done so well with Dollar (the horse I borrowed for the Flat part), but in reality the ride was a great one with Dollar-who could be very tricky on the flat, but not great enough to pass the "Flat" section of the "B" rating. (It took me until this past winter to watch the video of my my rating and realize how bad it really was) But in all fairness the weekend ended up being a great experience because they changed it into a clinic instead of a rating- so we were able to keep riding and improve our ride instead of showing off what we knew for the examiners.
After the "B" rating, Dollar, Liaison, and I headed back home and I took Liaison out for one last trail ride before making the decision to give him back or keep working with him. It was the perfect trail ride because he gave me every reason to keep him, and every reason to give him back. I have never ridden a horse so balanced and fast at a dead run, nor with so little control- truthfully it scared the crap out of me while at the same time gave me one of the greatest thrills of my life. I guess this is what it is like to be a race jockey- except I was out in the middle of a field, by myself, a good 30 minutes from home, not on a racetrack where if I had fallen off wouldn't of lost my horse! Coming home from that ride I made the decision to send him back because I wasn't skilled enough to handle all that power and channel it in a positive way. I know I had no desire to become the next Karen O'Conner and become some great Olympic level rider, I just wanted to enjoy my horses and ride to the highest level I could get to- which my goal is to make it to Prelim- hopefully complete a CCI*???? If not- at least be successful at Prelim! Since I do not have to be the greatest rider and be able to ride any and all types of horses to complete my goal, Liaison was packed up and taken back to his owner. I miss moments with that horse, but overall have been very happy with my decision to find another horse- and I didn't even have to look past my mom's backyard- my next horse had been there all along- just waiting for me to get the "B" out of my system! I fell in love with mom's Connemara/TB cross that had been given to her back in March. He proved to be more horse than she wanted but plenty for me! And after coming off of a ride on Liaison I found him slow and simple!!! Just what I wanted (though a little more spark would be nice!) 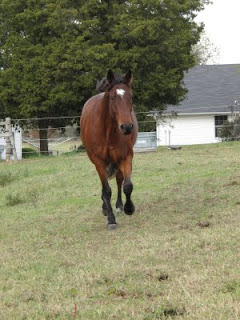 Gus is turning out to be a really nice horse and has only been jumping for a couple of months now. We have a long way to go before we're even ready for Beginner Novice at an event, but we'll get there! I'm in no rush, and going slow with Gus helps improve his confidence because he isn't the bravest horse in the world, but he is sure learning! Once he figures something out he's golden, but if he gets scared it takes a longer time to get him over it. So no rushing with this boy, but I know once he figures everything out he'll be the most amazing overgrown pony out there!!!!
Posted by Bee Tea at 3:46:00 PM 1 comment: