Fat Chimi is a Bad Chimi


Last Wednesday I decided to take Chimi out on a trail ride so we can start legging back up since we both gained some weight over the holidays from being idle for so long. It was a normal late afternoon ride and I thought nothing of it. The weather was perfect, the footing dry, and it was going to be light for at least an hour or more, plenty of time to hack down to the river and back! HAHAHAHAHA NOPE.

It started out like any ol' ride that we do and Chimi felt great. He was walking forward, was relaxed, and life was great. We even stood on the side of the road talking to one of the neighbor's barn help on a loose rein until my husband rode by on his new motorcycle on his way to get a movie for that night's entertainment. Did any of that bother my horse? No. He was his normal perfect self.


I had decided to go down to the river b/c the lady that rides Arrow had said they'd done a bunch of work on the culverts trying to improve the footing and allow for good drainage. I wanted to check out all the new improvements and so thats the direction we went. Suddenly Chimi started to fret and dance about. I didn't think to much of it and booted him forward and we made it down the hill towards the field right next to the river. I figured he was being a bit spooky b/c it was getting close to dusk and the deer like to hide in the woods by the trail we were taking. When we got to the point where the trail overlooked the giant river field I saw about 60 deer take flight and scatter into various directions into the safety of the woods and Chimi stood like a statue on high alert. Was he looking at the deer bound across the field, no, he had his eyes and ears fixed further off in the distance at the orange tractor moving a giant metal pipe that was probably for one of the culverts and he went batshit crazy. My normally calm horse started popping up and freaking out and tried to turn around and head home. I don't ever remember Chimi being this freaked out over anything that we've encountered in the past 4.5 years that I've owned him. I made him go down to the field where the ground was flat so I could do a little bit of flat work to chill his brain out but instead it had the opposite effect and wound him up even more. He was popping up on his hind legs non stop and trying to take off with me to the point that I decided I'd rather be on the ground instead of sitting on his back. This was the first time I've EVER felt like I've needed to bail on one of my horses instead of just riding it out. And I'm so glad I did bail! Twice he almost fell down in sheer panic b/c he couldn't focus on his feet and when I got him to stand still the poor guy was just standing there trembling from head to tail. I didn't want to just leave and let the whole ride be a negative experience so I did what I could to calm him down. 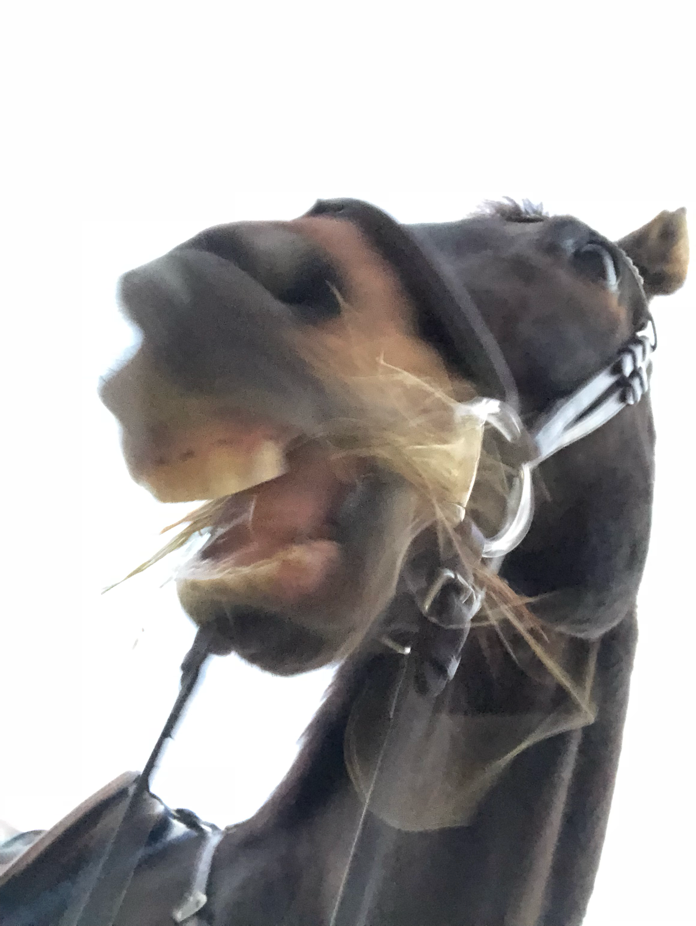 I never got any closer to the tractor, which was clear on the other side of the field, approximately a little less than half a mile away. I started out by trying to move his feet so he had to concentrate on me but that only seemed to set him off even more and he got worse instead of better so I switched tactics and made him stand with me and put his head down. He's such a good boy and really does try to do what I asked and I never felt in danger of him running me over. I gently put my right hand on top of his head and kept making him drop his head closer to the ground, and I'd rub his pole which he really enjoys in the crossties. My theory of getting him to put his head down came from a vet in PA that is a good friend of my mom who was explaining how horses' head positions can create positive and negative experiences. She said that when a horse has his head straight up he is looking for the predators. He's on alert so his nervous system is taking in everything and his body is getting ready to flee in case it needs to. But when a horse is relaxed their head is down and the body's nervous system is not getting ready to flee. So b/c of this if you can get your horse's head down in a stressful situation it will help to calm them and the negative memory won't stay in their memory bank for the next time you are in that situation aka the next time Chimi and I would be down at the at field. I have no idea how long we stayed in the field but after a while Chimi did stop trembling and calmed down a bit. I let him grab a couple of snacks with his bit b/c I wanted him to do anything that would create a calmer Chimi. Finally he was calm enough that I felt like the blind panic he had been in had passed and we could safely go home. 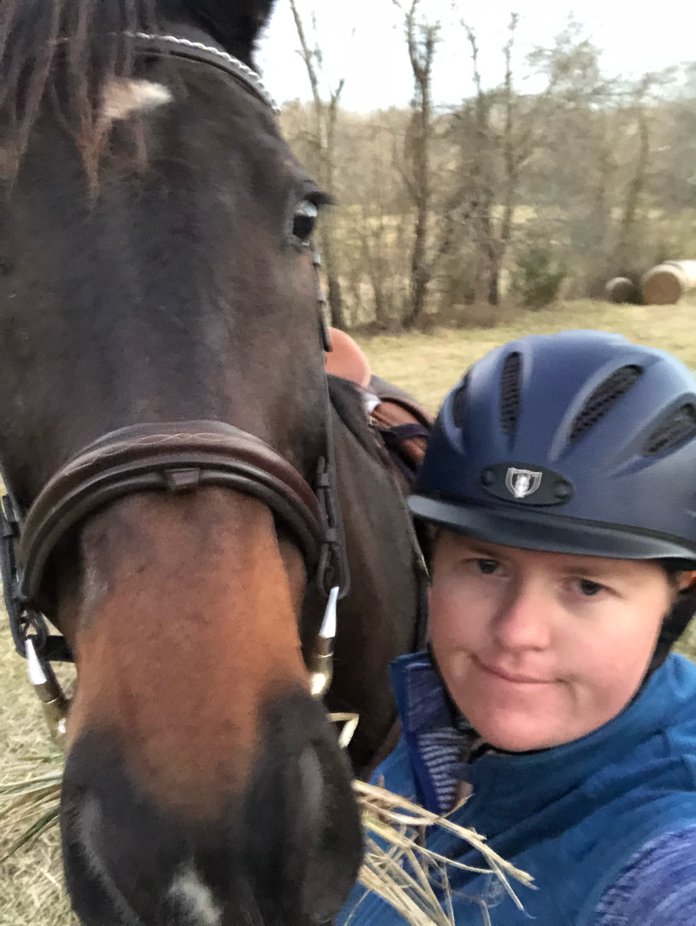 We were about a mile away from home so I hiked it next to Chimi praying one of my nosey neighbors wouldn't drive by and see me walking my horse. Thankfully no one did and Chimi and I had a pleasant time walking uphill the entire way back. Nothing like a mile hike to kickstart my fitness goals for the year! 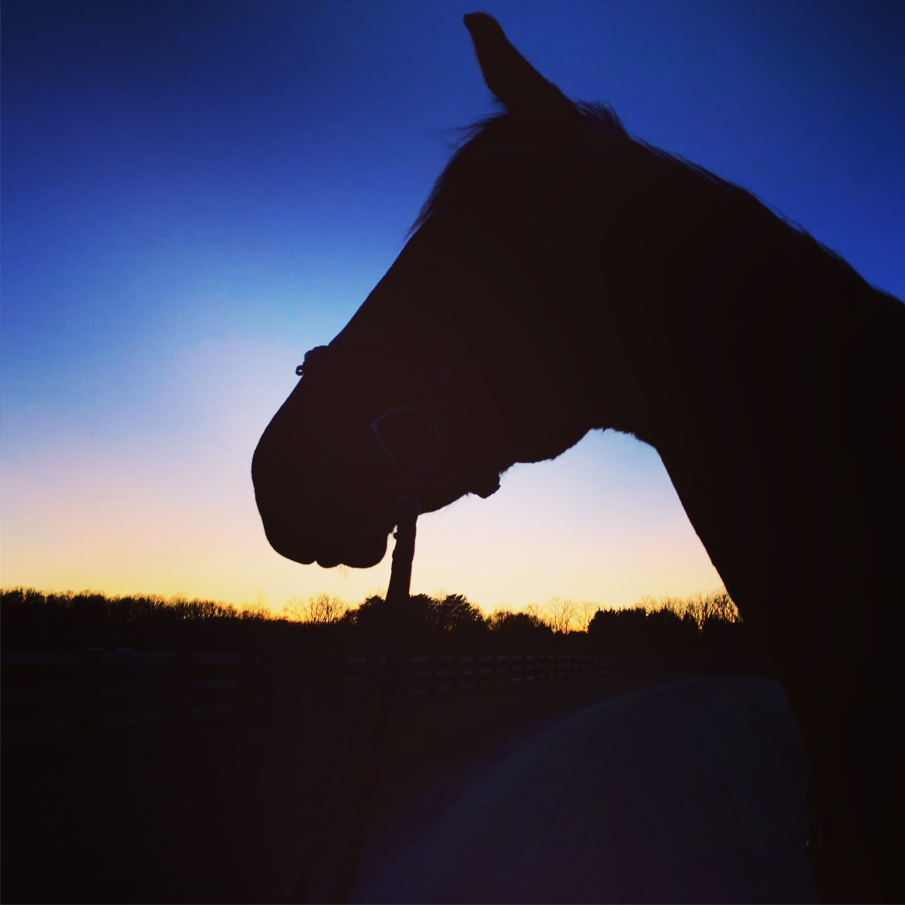 But I really did enjoy the walk with my horse on the way home. By then the sun had set and we walking back in the dusky dark and the last bit of orange hovered on the horizon. The temperature was starting to drop but I was dressed appropriately and kept warm by keeping moving. It was a really nice way to end a less than ideal ride just hanging out with my horse in the fading winter light. Sometimes a shitty ride can have a silver lining, but please Chimi don't lose your marbles again, that was not fun!!!! 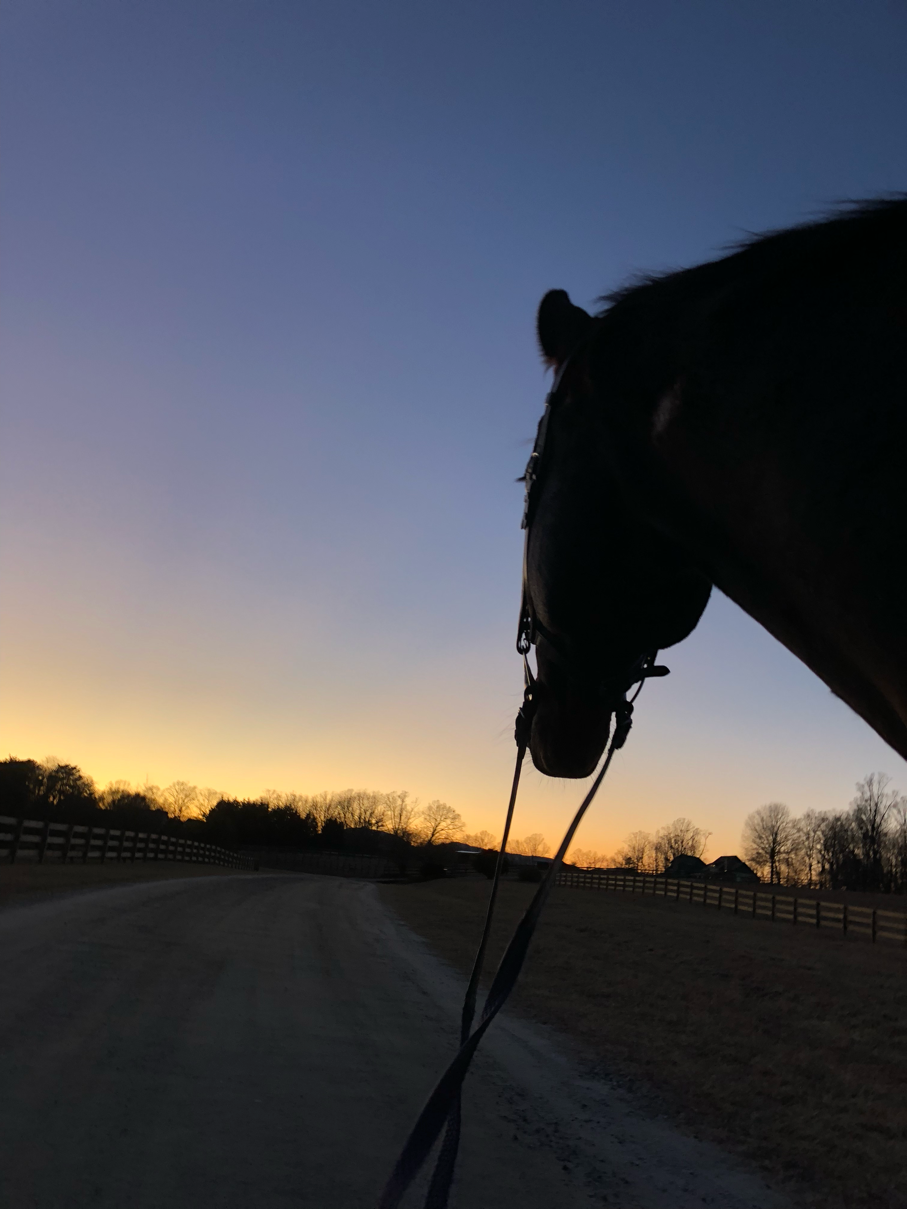 Yesterday morning I awoke to a buttload of snow that I wasn't quite expecting. Previous snow forecasts that I had read said we would see about an inch of snow and the forecast that I had looked at  before going to bed seemed to only predict snow for approximately 2 hrs total during the night. Whoops. It had started snowing at 3am and pretty much snowed all night and morning and stopped sometime around lunch. We ended up with ~4" of snow by the time is stopped!


Because I thought we were getting just a small dusting of snow I decided to keep the horses out. They have warm, waterproof blankets with a neck cover so I knew that they would stay dry and warm even if it did snow more than predicted. When I went down to feed I figured they would want to stay in their stalls for the morning and then I'd let them back out once it stopped snowing. So I lugged 3 water buckets down to the barn filled with warm water for each of the ponies and dropped 3 giant flakes of hay into each stall. After finishing their breakfast Marley and Arrow were quite content standing in their stalls eating the giant pile of hay, Chimi on the other hand was not.


Chimi ate his breakfast like normal and I offered him his bucket of warm water like we do every day. He took a few sips and then stared off into the distance on high alert in his stall. When I wouldn't let him out he started cribbing and I tried to get him interested in his hay. Normally if he has hay in front of him he doesn't crib but he had zero interest in his hay. He would walk a circle around in his stall, crib, stare intently off into the distance out his stall door, crib some more, maybe take a bite of hay, walk another circle, crib some more, stare, snort, crib, pace, crib, snort, pace, crib, etc. With the sudden change in temperature I was worried that he was going to work himself into a colic so I opened his stall door to see if he wanted to go out. He immediately walked out of his stall and made the right hand turn that takes him out to his pasture. I then had to let Arrow and Marley out of their stalls so no one would be left alone in the barn or outside. (I currently only have 3 horses at home instead of 4 like I have had in the past... Finn moved to a new barn with the girl that's leasing him...yay!)

Once Chimi was out he took a big sigh of relief and immediately calmed down. I tossed out more hay outside and Chimi quite happily settled down to eat a hay pile with Arrow while Marley looked annoyed that she had to be outside in the pouring snow. Poor Marley kept following me around the pasture as I dumped hay and de-snowed their water trough. She looked at me like "Why are we outside when we could be dry inside??" I gave her extra kisses on her frosty face and apologized for her brother being a prick-hole and making them stay outside in the snow!

After spending all day in the snow and with the real feel hovering around 15 because there was a steady wind blowing, Chimi did come into his stall for dinner and decided to stay there for the night. Marley was quite relieved that he finally came to his senses so she didn't have to spend another night out in the snow!

The past 9 days were just insane and I have new respect for you guys that live where 30°F is a warm winter day! I had enough of below freezing temps on day 3 and yet we had 6 more days of it! Barn chores took 2-3x as long as they normally do between breaking ice, carrying hot water from the house, changing blankets, cuddling with my horses for warmth (and b/c they're cute and cuddly), and making sure everyone was doing well and staying healthy. But we made it through this arctic air blast and being as far inland as this area is we missed the snowy bomb cyclone that caused the coastal area of the Carolina's to completely shut down. I really enjoyed seeing pictures of Charleston in the snow!

The good news is we survived and are here to enjoy some warm weather before the rain comes back on Thurs/Fri. Hopefully between work and the rain I'll be able to log in some fun rides with Chimi so we can really get the ball rolling and start moving forward in our riding. So enjoy theses pictures below from this past week plus of cold!!!