I didn't do a 2017 Goals post at the beginning of the year bc 1) I'm a bad blogger and post inconsistenly and 2) I'm crazy superstitious and don't like telling people plans before they happen bc it increases the odds of it not happening (it's a real thing guys and seems to happen to me!!! 😂) But I'm all about reflecting back on what I wanted for myself and did I accomplish it?

1) Compete Novice successfully- CHECK! Well we only went to 2 novices in the spring of 2017, the Fork and FENCE. The Fork's xc jumps were massive and I fail at judging speed at TIEC bc the cross country course is basically one giant circle that twists around and around and you never really go full out bc you're constantly circling. It's annoying. But either way we jumped clean, kicked some dressage ass, and didn't place in the ribbons bc of XC time. Out next outing was at FENCE and compared to the Fork I felt like I was running around BN again. We smoked it around XC bc we COULD gallop in a straight line, and jumped clear with an ok dressage test. And got a ribbon AND 1 of 2 qualifying scores for the AEC's (you needed 3 events and either 1 event 1st or 2nd or 2 events placing 3rd. We were 3rd for amateurs at FENCE)


2) Qualify for the AEC's- originally I had wanted to qualify at Novice and had plans to get the 2nd score needed at River Glen but 2 weeks before I slipped while hiking and my knee popped out of joint and I was crippled for about a month. So yeah, no riding which meant no AEC's. But then I got an email end of July/first of August saying I HAD qualified for the AEC's… at Beginner Novice. They changed the qualifying dates around and suddenly I had the 2 scores needed for BN to go. So I did! In hindsight I should of saved the money bc I wasn't really fit enough since I didn't really ride all summer bc I was working 12 hour days 6 days a week (I run the riding program at a summer camp for boys, it's not teaching plus it's summer camp so I still fall under the amateur status rules, I checked :) ) and since I didn't think I was going to the AEC's I wasn't making the effort to ride 4-6 days a week. Chimi stayed in work bc I had a lady taking him out on the trails but neither of us had attempted Dressage or a jump since I had injured my knee. Plus the cross country course was a big letdown from last year's AEC's and BN just ran around in a damn circle around the Derby Field at TIEC. At least last year we got to go around the barns and down past the congested water complex and loop around by the river and had real galloping spots. But I did have a great time and while the riding part wasn't very exciting at the AEC's this year I really enjoyed the social part and I met new fun people and hung out with old friends. Plus I ran into my trainer growing up who I hadn't seen in YEARS (at least 5 years or more) so it was great catching up with her! So basically I'm kinda torn whether it was worth it to be there or not. I do know if it hadn't been at TIEC which is all of 22 minutes away from my house I wouldn't of gone. But since it was local I did it bc I really wanted a pretty ribbon. Sadly due to my lack of fitness and not enough saddle time we got an awkward distance to jump 9 in stadium and pulled the rail (it was probably the most pulled rail on the course, probably bc you were coming out of a tricky corner and if you didn't ride forward enough it the jump fell). While we were definitely forward enough coming out of the corner Chimi was unbalanced and not listening to my half halts and I sort of froze and didn't do anything so we just sort of ran to the base of the jump in an ugly canter and Chimi did his best to get over it but he was so close to the jump that he pulled the rail. I should of been more firm balancing him through the corner but I do think if we had been working all summer he wouldn't of been unbalanced bc he would of been strong enough in his hind end to power through in a nice canter. Grrrr. I'm still a bit sad about that ribbon though. They really did give out gorgeous ribbons.

3) Karen O'Connor Clinic- I DID write a blog post about this so I'm not going to rehash over it but you all know that Chimi was lame so I took Joe.

My fall season was basically shot with the Abscess of Doom but after the AEC's I didn't really want to spend the money to compete when I realized I needed to get the basic fitness back that I had lost over the summer. I'm glad I had made that decision BEFORE the Abscess of Doom so I wasn't to disappointed when I couldn't do anything with Chimi.


So there ya go. The AEC's and Novice were my goals for the year and I mostly accomplished that. I'm not really the kind of person to set other types of goals like work on half pass or jump 3' or go XC schooling 1x a month. I kinda let those type of goals happen naturally and tend to stick with picking a competition goal like going to the AECs. If I pick something big like that or decide to move up a level I do what I need to to accomplish that which would cover the jump 3', go XC schooling, work on connection, and whatever else we need to do to be prepared for the competition and do well (not necessarily 1st place well but want to finish successfully, if that makes sense.) And on that note 2017 is coming to a close and we'll see what we have in store for 2018! But first we must survive Christmas... WOO!!!!

Merry Christmas and Happy Holidays to you all!!!!

Ambling Through the Snow on an Angry Painted Pony…

Last weekend it SNOWED!!!! I know this isn’t any big news but it was a big deal for us in a normally nonsnowy area. I didn’t think it would stick like it did but we got around 2” of really pretty fluffy snow. Just up the mountain in the Hendersonville/Asheville area they got even MORE snow with anywhere between 10” to 12” of gorgeous, packable, snowman making snow. And just a short drive south or across they got flurries and rain with little to no accumulation. Crazy how within an hour drive you go from nothing to a foot of snow…(also apologizing now if pictures and captions are weird… I’m editing this post on my phone) 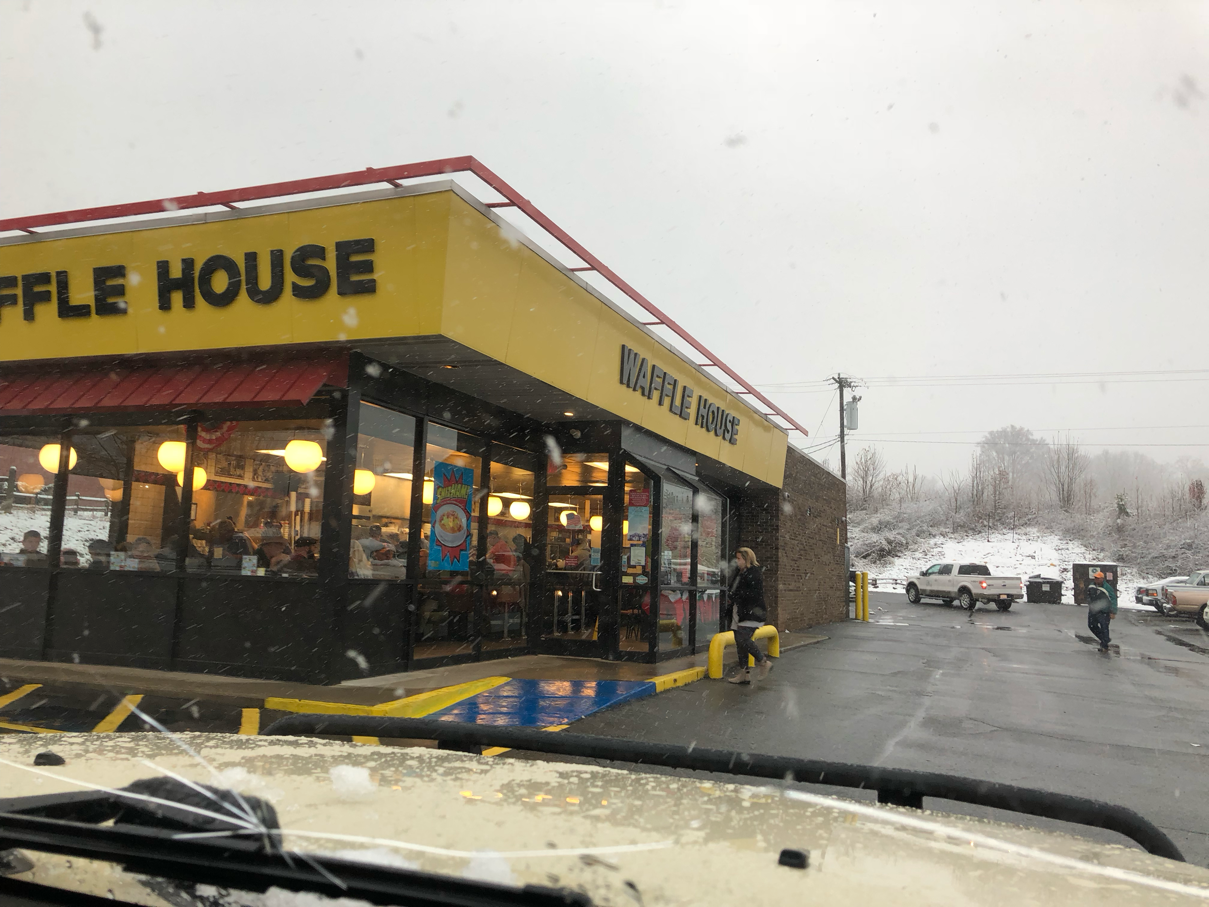 Everyone goes to Waffle House when it snows!

ANWAYS back to ponies!!! By the time I got back home from work on Friday I had time to feed the ponies and then it was dark. But the snow kept falling and I couldn’t help but get excited as I tucked the ponies in their stalls for the night. The next morning I was determined to go riding while the snow was still falling in big beautiful fat flakes and grabbed the trusty old horse, Arrow, for a “magical” snow ride. HA. 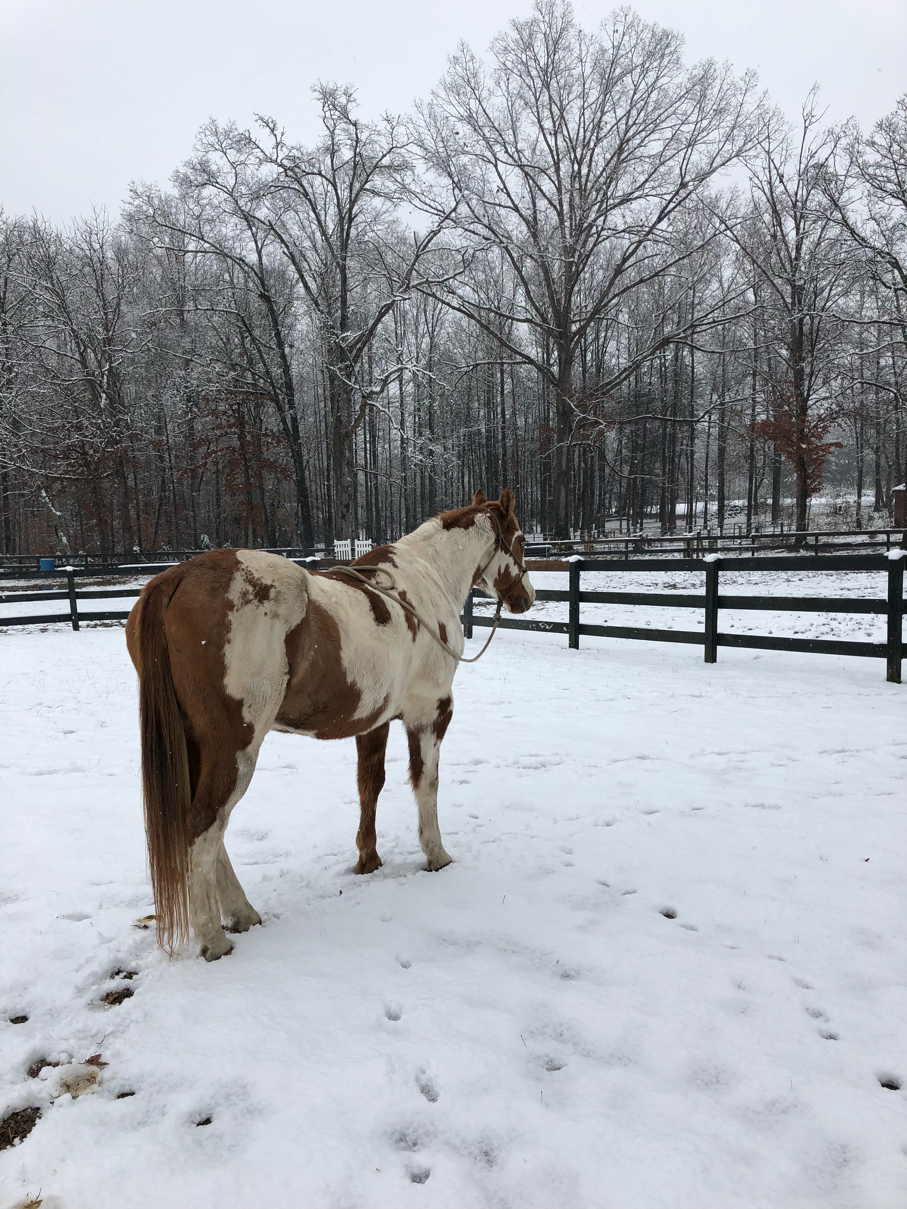 If I stand still maybe she won’t see me…

Marley and Chimi happily went out to eat their hay and poor Arrow looked over at them longingly as I grabbed my rope halter for him. Arrow is a pretty chill dude, and the guy has had some really nice training somewhere in his past, so you really don’t need a bridle to ride him. He’s 22 this year and he’s just the perfect “let’s do it” horse bc he’s not going to do anything completely stupid and can take a joke, even though he might roll his eyes at you. 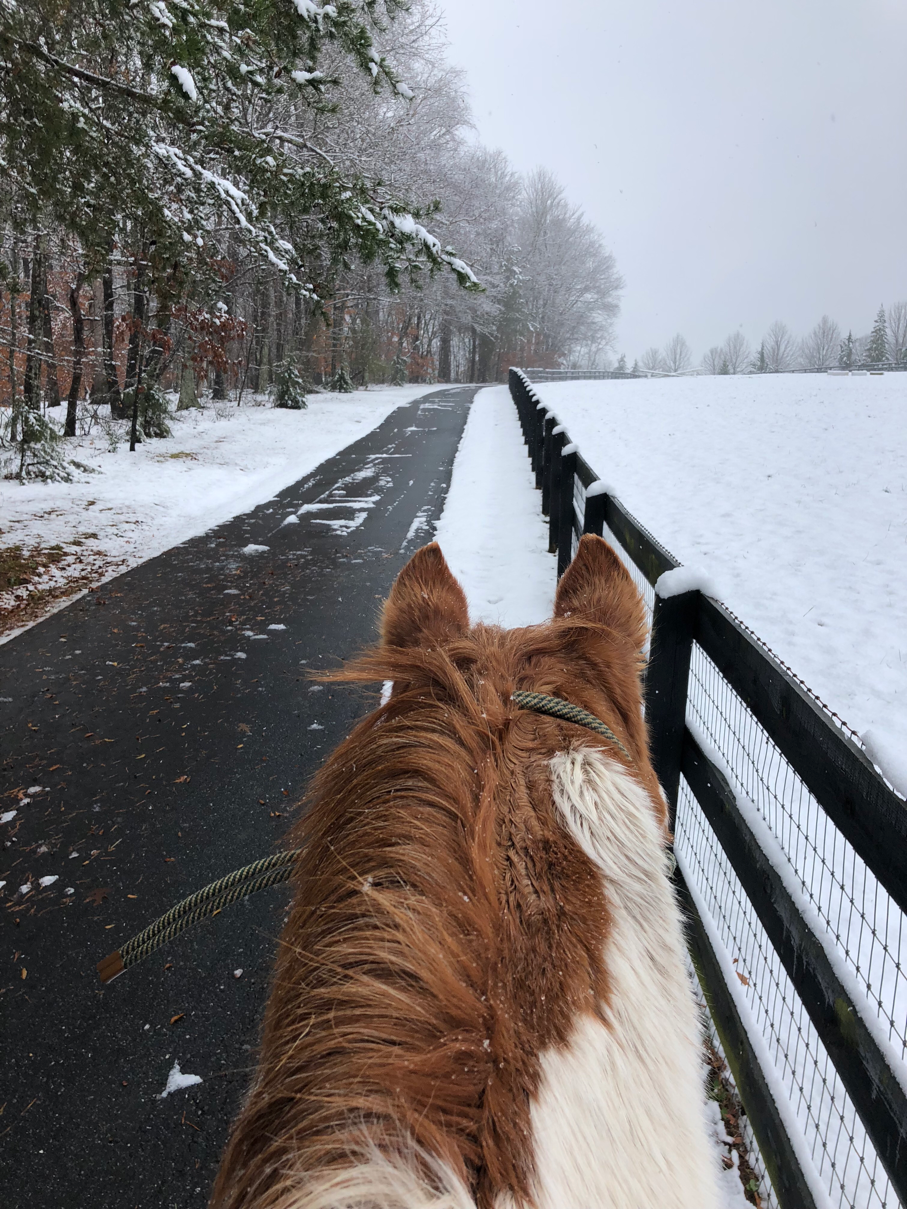 I drug poor Arrow over to the mounting block and he would not stand straight to save his life. This should of been clue #1 that he was not in the mood to play games but I sweet talked him into a short ride and off we went! 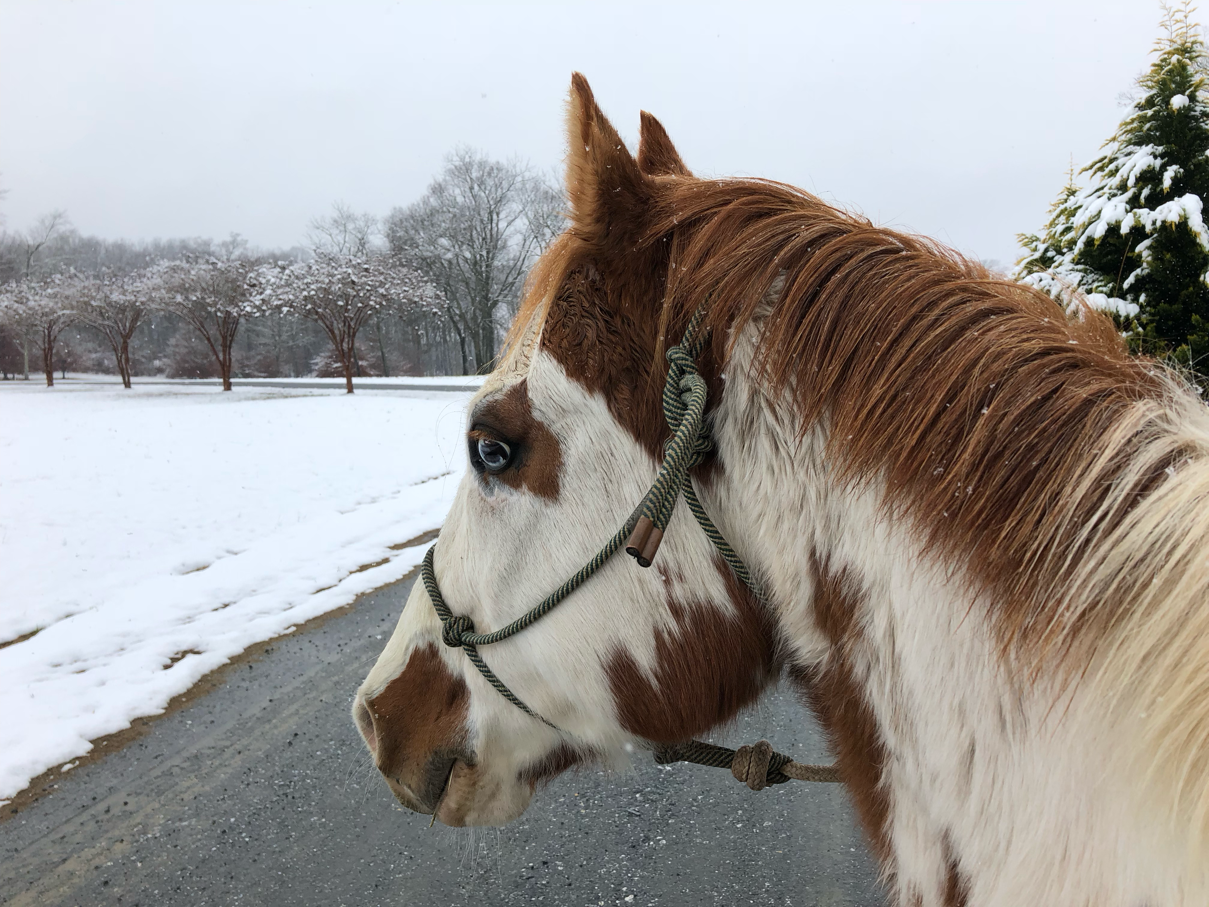 Look at my Yak fur!

The entire time up the driveway and down the road he kept trying to turn around. He wanted none of my magical snow ride and made his opinion very clear. I couldn’t help but laugh at him and promised just a little bit further! And he ambled on. Finally after trying to take some pretty snow ride pictures I let him turn back and ZOOM. Arrow was on a mission home.

When we got back to the barn he was very happy to be let out to munch his hay with his friends. Actually I don’t think he cared about his friends, he just wanted food after being “tortured” for 15 minutes!!

I am pretty lucky that this little furball showed up in our life 4 1/2 years ago. He’s quirky enough to make life interesting but safe enough that I can put anyone on him and he’ll take care of them. Plus this old guy is still going strong and has plenty of life left! Maybe next time he’ll be more excited about a snow ride but I doubt it!!! But either way he gets plenty of cookies and love when I ask him to do something that’s not a part of his normal life and he always obliges. :) 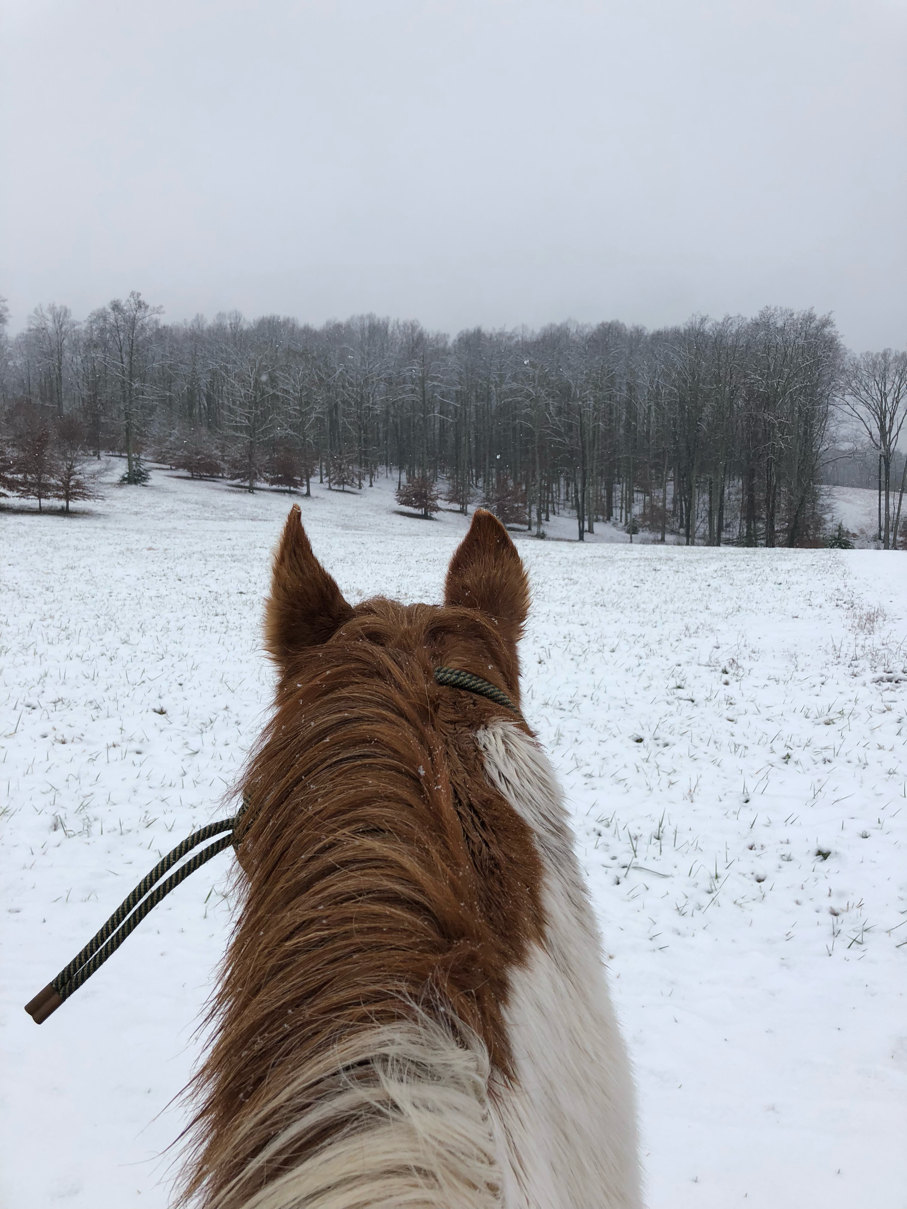