ring ring ring- i glanced over at my purse thinking crap, I don't want to answer my phone but it was G- the barn manager. I grabbed my phone and ran into the living room and hit the send button.
"Hey G"- I said while thinking oh crap did i forget something at the barn and she's calling to tell me i'm in trouble?
"Where are you?" G asks
"I'm at Dad's" was my reply
"Ok- Byrdie attacked your horse and you need to get down here as soon as possible"

I grabbed my things and quickly drove out to the barn. As I pulled up the driveway I glanced around looking for my horse. I saw that Byrd was penned up in the little feeding stall and the barn lights were on. I walked up to the barn not really sure what I was about to see and hoping it was just a bite mark. I approached the wash stall while G was on the phone talking to Dr. M and looked at my horse Liaison. He was looking out towards the fields and trembling slightly. G had washed him off and put a cooler on him to keep him warm. I quickly checked his legs thinking please let them be clean! The last thing I needed was another lame horse.

Horses are a passion of mine and I am currently a memeber of the USPC. For the past year I have been trying to get my B rating. This is one of the upper level ratings that pretty much means I know how to ride. I might not be the best, but I can get on a horse and ride. The rating system goes from D1 to A (D1, D2, D3, C1, C2,C3, B, H/HA, A). I have spent the majority of my life riding, competing, and moving up the levels to where I am now- an H- which means I passed the knowlege of the HA but haven't passed the riding for the B. Which leads me to my current situation. I have spent the past year trying to find a horse that is talented enough to be my "B" horse. Liaison is the 2nd one that I've gone through this year- and the 4th one that could go to the B. Last year I had a horse named Toby who was amazing. He was a gorgeous 17.2 chestnut Dutch Warmblood that had health issues I thought I could deal with. He was a powerhouse over the jumps- clearing them with room to spare. On the ground he had the best manners- which is very important in a horse his size, because he would of been able to flatten you like a pancake if he was so inclined. But as my luck went, Oct rolled around and he went lame. He was off and on lame for 3 weeks until the vet came out and took some x-rays. The news was bad. He had pretty serious ringbone- which is artritis in a horse's legs, and coupled with his massive size, other health issues, there was nothing we could do. He was in a catch 22- leave him out to pasture and he would founder (a very painful disease in his feet), or keep him contained to a small area and he would be 3 legged lame and barely able to put weight on his front right leg. The decision was made to put him down and come Dec 7, he was frolicing in the great green pasture in the sky.

It took me almost 3 months after Toby, before I found Liaison. Liaison was sound, no problematic health issues, and was free. I am not in a place where I can spent lots of money on a horse and unfortunately the more expensive horses have the talent needed for a B rating. I have until Dec 31 before I age out and can no longer try to pass the B. But really less than that b/c I have to be at a scheduled rating and my goal in the one Labor Day weekend.

Looking at Liaison standing in the washstall, trembling from nerves I thought- oh please not something else. G lifted up the blanket covering my horse and pointed at the red, swollen gashes lacing across Liaison's sides and I wanted to scream. the blood red stood out against his almost black coat and ran all along his barrel and across his flank and into his rump. The other side was worse. A huge gash ran from the middle of his neck to his withers and more across his barrel, right under where the saddle would go, and teeth marks raking down from his croup and ending at the point of his buttocks. Thank god that the scrapes were only superficial and nothing was deep into the muscle. What probebly saved my horse from further damage is his abilty to run. He is a full thoroughbred and raced in his younger days. Byrd is an Appoloosa and doesn't have the speed that Li does.

G and I bathed his wounds with betadine solution, and checked him for any other injury. His legs seemed fine- no swelling or heat that looked like trouble but we weren't taking a chance. I limamented his legs and G applied a cold clay poltice to his legs and I followed behind with wet brown paper and a standing wrap. G also applied Alu Spray to his cuts and by the time we were done he looked like a deranged Christmas ornament. His legs were white with poltice down to his hooves, red wraps in the back, green ones in the front, and silver spray tracing his cuts that looked like a 2 year old's drawing in a 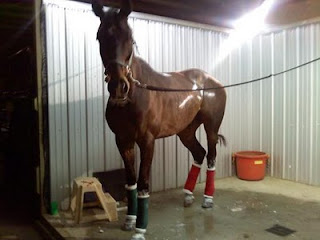 coloring book- not staying "in the lines".
We decided to put Liaison in the paddock by the barn and G went down and got the tried and true, best companion horse- Maaike to come and stay with Li for the night. When Maaike ambled up to the barn Li looked out and tensed up until he realized it wasn't Byrd. He then relaxed and we put both horses into the paddock with fresh hay and water for the night. When we left the barn both horses were standing side by side munching their hay and my horse's eventful night finally turned into a peaceful evening.
Posted by Bee Tea at 10:36:00 PM No comments: