On August 26th I finally got around to breaking my almost 10 year dry spell of not competing in a horse trials (Last HT I competed in was Nov of 2002!) I took Gus to Tryon Riding & Hunt Club's schooling horse trials at Windridge. Even though the recognized horse trials drought still continues, I was so excited to FINALLY get out and participate in something!!! I wasn't even sure if we were ready because we hadn't been cross country schooling, had only had a few jumping lessons recently, hadn't looked at my Dressage saddle since March, and I hadn't been riding him as consistently as I would of liked. But despite all of these thoughts running through my head I decided to enter anyways because I was tired of  having so many excuses and there comes a point where you just do it, and so we did! And what a successful day it was! Gus was a super star (like always!) and he rocked out a 29.1 in Beginner Novice test B, jumped clear stadium and clear xc!

It was one of those days that everything went awry yet somehow came together for a great result. It started out with me running late to the barn, continued with time management nervousness (I think I have it under control and then I realized I don't!) Panic at losing Gus's shadow roll (which I washed the night before and could of sworn I packed it!), sending friend Rachel to look for something that would work while I warmed up for stadium that started in 15 mins (did find a substitute and then found the one I was looking for hiding under something in my truck!) and then completely forgetting that cross country was timed, had no idea what the optimal time was, had no watch to even time it if I had wanted to, and just decided to ride and not care because I was having fun! The end result was something I was not expecting, but completely welcomed, with a boost of confidence in myself and my horse.


Despite all of my worry and terrible time management (it's something I work on every day of my life haha) Gus and I somehow pulled off bringing home a BLUE ribbon!!!! When I saw the organizer walk towards me with a smile on her face and a blue ribbon in her hand I thought surely she was going to walk past me and hand the ribbon off to someone else, but she stopped at Gus and said with much excitement "Congratulations! You did a fantastic job and this is for you!" I really did tell her she must be joking because there was no possible way we could of won, I'd forgotten my watch after all! She laughed and told me to check the score sheet because I really did win!

And so after checking the score sheet I gladly accepted my blue ribbon and showered Gus with more kisses and pets and OMG's how did we pull this off??? and You are the best pony ever!!!! 's :) Don't worry, he'd already received many pets and kisses and good boys after every phase we completed, but there is something about being handed a blue ribbon that starts them all over again!!! My little helper, Small Fry (as I nick-named her) fed Gus many peppermints and of course had to put her hat on him because winners wear hats right? And Gus being the best little pony in the world (ok so he's not a real pony since he's 15.3, but being half Connemara gives him the right to be called a pony!) he wore the hat with dignity and didn't try to eat it either!

Even though we were just competing Beginner Novice, I couldn't help but think we had just finished up a qualifying score for Rolex. After all Gus is just starting his eventing/jumping career and I'm dusting off the ol' boots and britches and finally getting my game on!!! Hopefully this is just the start and we'll be in full swing event mode before you know it!!!! 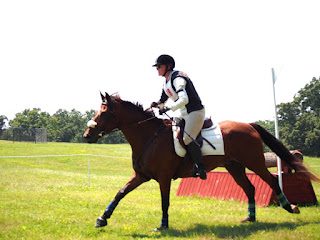