My Love/Hate Relationship with my Barn

Because of the basically nonstop rain we've had the past 10 days, I've had to spend a lot of time in my barn bringing horses in and out of the rain multiple times per day and cleaning the barn, multiple times per day. I have spent many hours smiling at my barn and then turning around and shouting obscenities at it too. You see, my barn was built by the previous owners who really didn't know that much about horses (plus I think they were trying to be cheap and decided to build the barn themselves instead of hiring someone to build it for them- I don't think they knew much about construction/design either)


For the most part I love our property, the house is cute, the pastures are large, and it has a barn that protects the ponies from nasty weather and stores things. It's cute from afar and has a country feel to it (which I love) but for the day to day workings of the barn, the only word to describe it is functional. Yes it has a place to store hay, yes it has a tack room/feed room, and yes it has 4 12x12 stalls. But thats where the normalcy ends.


As you can see, the four stalls are in the middle of the barn and form a square with everything else built around the stalls. The tack room is on one side of the square and is separated by a very narrow aisle that is about 3'-4' wide, just big enough for 1 person or 1 horse to get through- but not a horse and person together-that could get dangerous real quick if something spooked the horse. I don't have a picture of the narrow aisle way but below you can get an idea how the stalls are set up- definitely not your center aisle design!


The wash rack is located outside and does not have a roof over it. That's fine but unfortunately the corner of the barn roof is located at horse eye level at the edge of the wash rack where the posts for the cross ties are. In the picture below you can kinda see right behind Chimi's ears is the edge of the roof line. Because of this I have to have uneven cross ties and keep the left cross tie short and the right one long so that the horse's head is in the open space. You can also see that the roof line is really low, especially when you're dealing with a 17h+ horse like Chimi. Thankfully it's only an issue on the edge of the roof and the inside where the stalls are is quite high, plus the stalls have another 6" drop when you walk into them (I actually like this- helps keep the shavings in the stalls!) 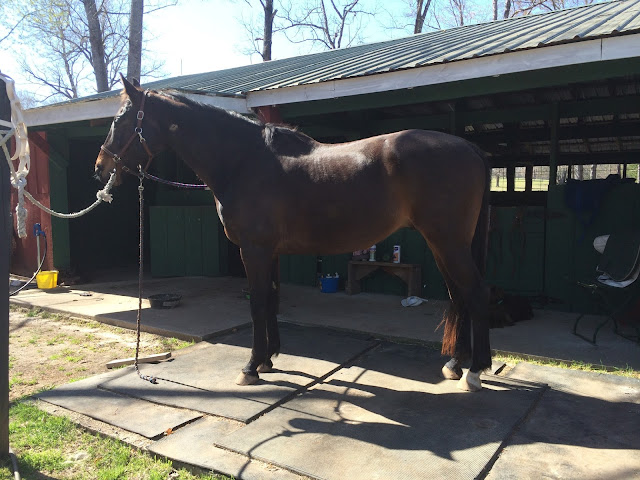 The good thing is my barn is quite airy and has good airflow. In the picture below you can kind of see how open the barn is for air- the only solid walls are between the two storage areas (tack and hay) and the main part of the barn has been kept open. As a result my barn is not super dusty because the dust that gets stirred up just flies away :)

On the back side of the barn, where Marley/Gus's and Arrow's stalls are you have the gate that opens into the back pasture. This is quite handy because I can open the gate to let the horses in when it's time to feed. My ponies are quite smart and have learned where their stalls are. As soon as I mix their grain and put the feed tubs in their stalls I keep their stall doors open and and head to the back and open the pasture gate. I rarely use a halter to get my horses in or out of their stalls during feeding time. They know that as soon as I open the pasture gate that their food is waiting them and when I open their stall door after they're finished they know that either grass or hay is waiting for them back in their pasture. I absolutely love this feature of my barn. It helps cut down on wasted time walking back and forth between the barn and pasture. When it's just me feeding the horses I really appreciate being able to be as efficient as possible. I can check water and toss hay while they're eating and they'll be done around the same time I am. When I don't have to mess with sheets and blankets I can usually get the horses fed and out in 30 minutes- 20 minutes if I mixed grain ahead of time. This is important when you have places to go but have to feed the horses first!

Even though my barn has a quirky design I kind of enjoy it. I have learned how to function with it and do like that all four horses can see each other when their in their stalls. However there are some major faults that have me pulling out my hair and screaming with frustration. I mentioned in the opening paragraph that the barn was built by the property owners, not a real builder. For the most part the barn is structurally sound, but two major faults exist because they didn't know enough:

1) The sides of the barn are rotting because they didn't put gutters up or extend the roof past the walls.  When it rains the water fall right off the roof and streams down the walls. I can't turn on my outside lights because rain water has dripped into the electrical wiring and burt out one of the lights. If I accidentally turn those lights on the other lights in the barn start flickering and I freak out and immediately run over and turn them off (all of my light switches are in 1 place) This isn't a big deal except in the winter or if I feed late at night. If I have to toss hay I have to do everything by flashlight because I'm afraid to turn on the outside lights. But this doesn't drive me as crazy as the 2nd major issue

2) If it rains a lot my stalls turn into lakes. I currently have 1 dry stall in my barn from the 10 day monsoon. 2 of the remaining 3 are just wet and the 3rd stall has standing water in it. Finn's stall is the first to flood. If it stops raining it'll eventually drain out or be absorbed by the shavings in his stall. If it's a major rain the water from Finn's stall will drain into Marley/Gus's stall and just sit there. Last year I had to scoop the water out with buckets because it wasn't draining fast enough. Poor Gus has been trying to eat his food without going into his stall because he doesn't want to stand in 1-3 inches of water. I can't say I blame him! And now Chimi's stall for the very first time has flooded. I have no idea where it's coming from because it only happens when it's been raining for long periods of time, which make me believe it has something to do with the water table and it's flooding because the foundation wasn't properly prepped.


I really do think I could handle all the weirdness of my barn if it weren't for the flooding/water issues. Unfortunately that means that I will have to build a barn and barns cost more money than I have right now. I know that if I build a barn I want it to be as perfect as I can make it for functionality. I don't want a super fancy barn with all the fancy upgrades, but I do want a barn that is safe, functional, and most of all DOESN'T FLOOD!!!!!!!!! But until that happens I will just have to deal with the ponds in my stalls....
Posted by Bee Tea at 2:10:00 AM 4 comments: